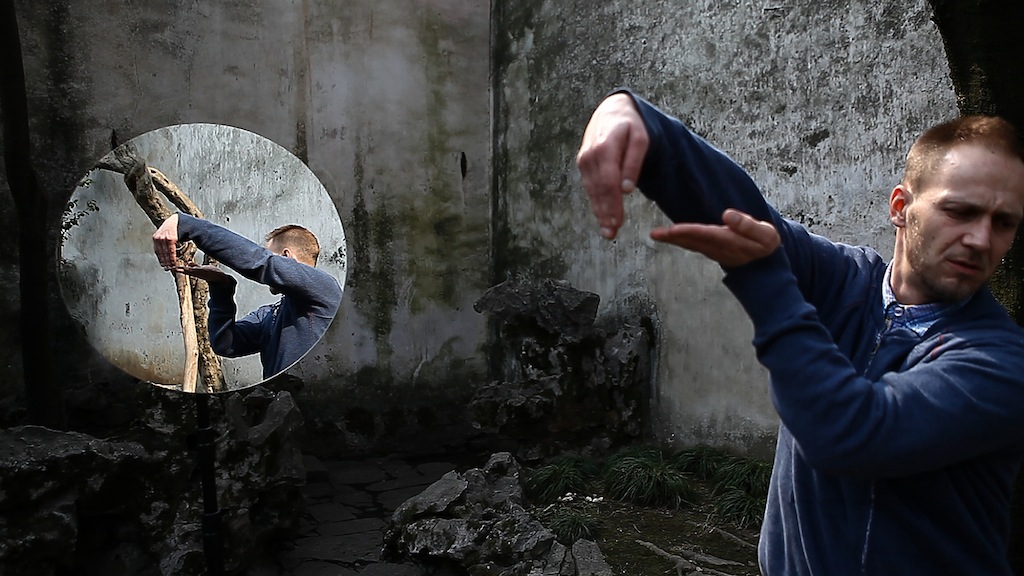 Your embodied garden, 2013
Produced by Studio Olafur Eliasson, Berlin, and Vitamin Creative Space, Guangzhou
On view until 13 May at the Sharjah Biennial 11.
© Olafur Eliasson

Your embodied garden, 2013, is a new filmic work by Olafur Eliasson. In February 2011, Eliasson visited the Master of Nets Garden and the Lion Grove Garden, two scholar’s gardens in Suzhou, China, with, among others, writer Hu Fang, gallerist Zhang Wei, choreographer Steen Koerner, and a film team. The aim of the journey was to explore the traditional gardens as models for physical movement, for duration, flow, and rhythm.

Eliasson explains: ‘What particularly interests me about the scholar’s garden are its various temporal aspects: the creation of the garden, the cycle of changing seasons, but also the visitors’ physical moving-through its convoluted and intricately linked spaces. What I find so inspiring is that these different notions of time passing are taken as explicit co-producers of the garden.

When I went into the scholar’s garden, I saw the garden, but I also saw the limits of what I could see; I saw the construction of my own way of seeing things. I used the garden to reflect myself. It was gardening me, so to speak, and it was also gardening Steen’s body. It directed his relatively minimal movements, with me giving choreographic input on an intuitive and emotional level: Steen ‘becoming’ a garden, a tree, or a rock, but also becoming a user of the garden, of its conditions. This meant inversing our perspective, to look at the body as a result of the garden, not the other way around.

The film contains another, subtle layer: apart from my friendship with Steen, I drew on the presence and great company of a landscape architect, a film director, a team from my studio, and a participant from my Institute for Spatial Experiments. This group of people performed a small topography of skills and social exchanges from which the recordings took shape, more as a workshop than a traditional film with a script. As an interconnected body we read the garden landscape by moving through it. These resources still resonate in the film.’

The garden visits also became the inspiration for an artist’s book, Never Tired of Looking at Each Other – Only the Mountain and I, co-published by The Pavilion, Beijing, and Koenig Books, London, in 2012.

Prev: The Pavilion: Does Europe Matter? Next: Koki Tanaka: a pottery produced by five potters at once (silent attempt)
Share->Douban Twitter Facebook